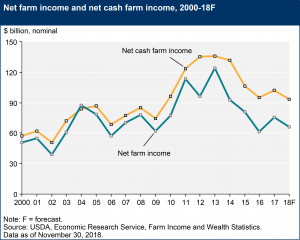 If realized, inflation-adjusted net farm income would be 3.3 percent above its level in 2016, which was its lowest level since 2002. 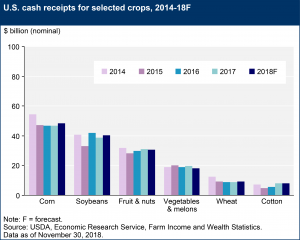 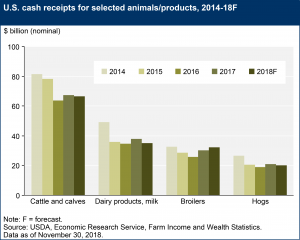 While discussing commodity program payments, ERS noted that, “Payments under the 2018 Price Loss Coverage (PLC) and Agriculture Risk Coverage (ARC) programs are expected to decline due to higher 2017/2018 market prices for most key crops (those that generated the majority of past years’ PLC and ARC payments).”
Also, “Conservation payments—reflecting the financial assistance programs of USDA’s Farm Service Agency and Natural Resources Conservation Service—are expected to exceed $3.9 billion in 2018, up 2.5 percent from 2017.”
ERS pointed out that, “The large increase in the 2018 forecast for the miscellaneous programs category [or the “all other payments,” in the graph below- purple] reflects payments from the Market Facilitation Program. This program provides direct payments to assist corn, cotton, sorghum, soybean, wheat, dairy, hog, shelled almond, and fresh sweet cherry producers in response to trade disruptions. The forecast reflects payments issued on the first 50 percent of U.S. producers’ total production of the commodity.” 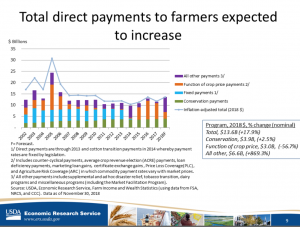 Federal crop insurance represents another aspect of net farm income, and is represented in the graph below from Friday’s ERS Webinar: “Farm Income and Financial Forecasts, November 2018 Update.” 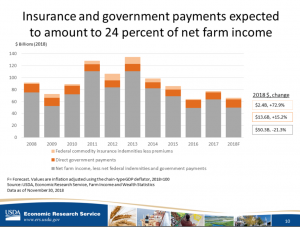 In a look at production costs, Friday’s update pointed out that, “In 2018, production expenses are forecast at $369.1 billion, up 4.2 percent ($14.8 billion) from 2017, with most categories of expenses projected to increase.” 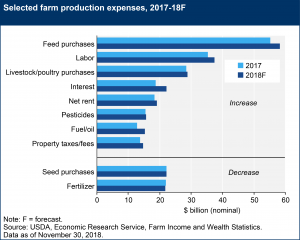 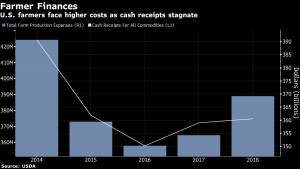 Friday’s update also provided a perspective on farm household income, and stated that, “Farm households typically receive income from both farm and off-farm sources. Median farm income earned by farm households is estimated at -$800 in 2017 in nominal terms and is forecast to decline to -$1,548 in 2018.” 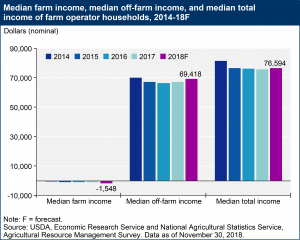